​
This is my estimate of how the 4 Wards or 6 Wards of Blooming Grove will look like, after the Orange County Board of Elections receives a request to create them, for redistricting purposes based on using the US 2010 Census population figures (slightly altered by New York State).

​First, this is the map of the current 16 Election Districts in Blooming Grove. 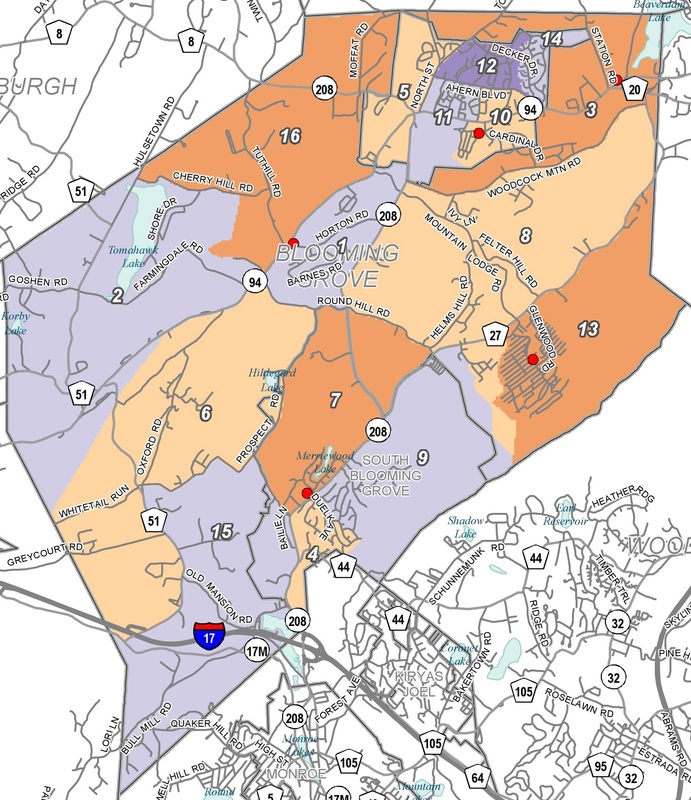 I displayed the map above as I currently cannot access my software to change colors of the election districts it shows, for the "Wards" most likely to be created from the Election Districts.  You will just have to connect the dots after reading the information that follows.


​This first analysis is for the most likely districts that may be created for a "4 Ward System" if it needed to be implemented in Blooming Grove:​ 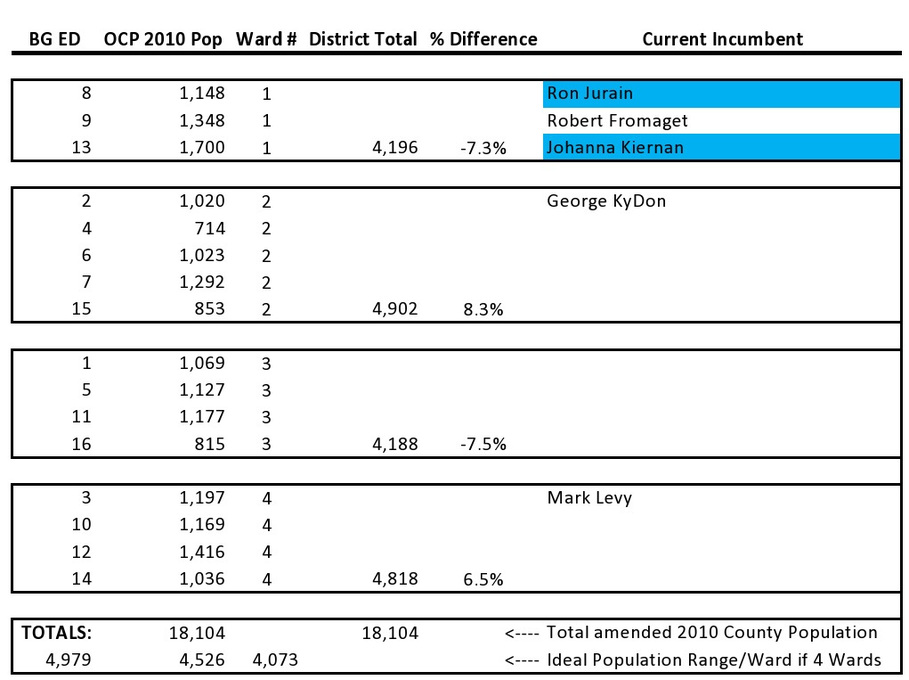 Here are key aspects of the details above:

​Only one set of Wards can be derived within those variances, without breaking up the Election Districts.  I expect the Orange County Board of Elections will not break up the current Blooming Grove Election Districts for a new "Ward System" that would probably need to be redistricted again after perhaps two election cycles because of the 2020 census.  That set of Wards is listed above.

​Ward #1 would require current Council members Ron Jurain and Johanna Kiernan to run against each other if they wanted to remain Council members, in a "4 Ward" System environment.  This is due to the nature of where their Election Districts are located, which are next to each other.

Interestingly, current Town Supervisor Robert Fromaget is also from this likely Ward configuration.  I listed him as an incumbent from Election District 9.  I think Town Supervisors, like Town Council members, always do a good job representing the concerns of their neighbors within their Election District.  More on that later, when I discuss the elected representation over the last 14 years (2004 to 2017).

​Ward #2 would have current Council incumbent George KyDon as a resident.  This is the ward he would most likely have to represent in a "4 Ward" System, if he decided to seek re-election in this "4 Ward" System.

Ward #3 would have no incumbent Council member.

​Ward #4 would have current Council incumbent Mark Levy as a resident.  This is the ward I would most likely have to represent in a "4 Ward" System, if I decided to seek re-election in this "4 Ward" System.

Ward #1 is the most distressful part of going to a Ward System.  I think that from watching them the past year prior to running for office, as well as this year as experienced colleagues on the Town Board, that to have to lose either Ron or Johanna from the Town Council, if both decided to seek re-election when their term ends in 2017, because of the idiotic idea that 2 people from the same "Ward" is a "less representative" form of government in our little town (little both in population and in square miles), is ludicrous.  And I can 95% guarantee you that no matter how the Orange County Board of Elections decides to draw up Wards for Blooming Grove in a proposition to change the electoral system passed, if the voters force a Ward System by approving such a ballot proposition, Election District 8 (Ron) and Election District 9 (Johanna) will be combined together under a Ward System.

​So the paragraph above proves Blooming Grove does NOT have a significant "lack of representation" problem for any of those 4 Wards - so why this seems to refute the claim that a Ward System is "more representative", since the voters are already engaged enough to seek the representation they want from all over the town?

This next analysis is for the most likely districts that may be created for a "6 Ward System" if it needed to be implemented in Blooming Grove: 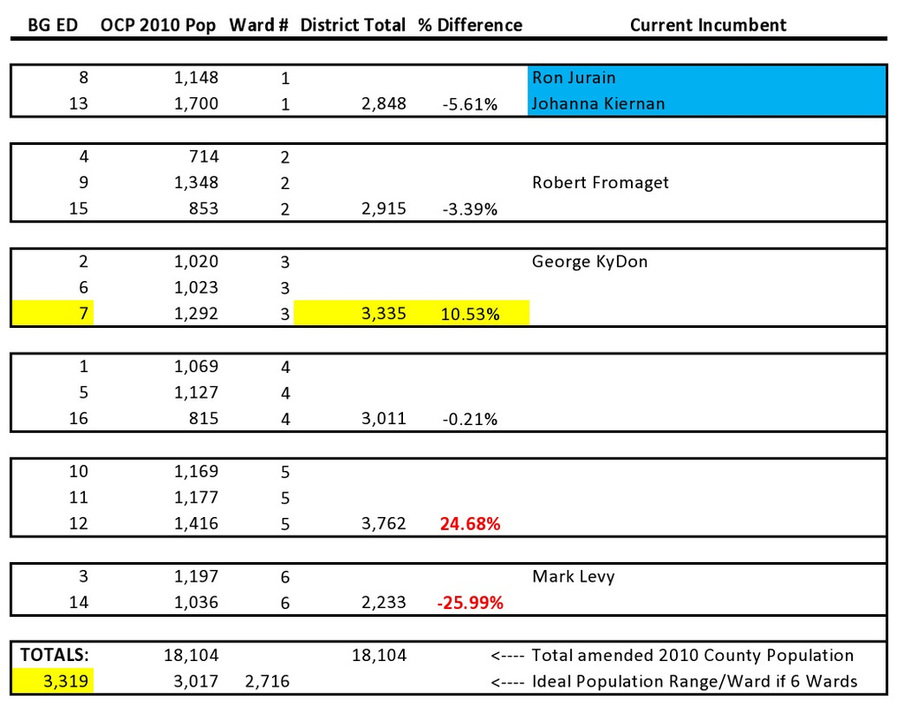 Here are key aspects of the details above concerning the "6 Ward" environment:

​No set of Wards can be derived within those variances, without breaking up the Election Districts.

The example above is giving the likely districts, but that is based on the Orange County Board of Elections taking at least 16 residents out of Election District 7 and putting them (my guess) in either Election District 4 or 9, since all three of those Election Districts are part of the current village of South Blooming Grove.  Please note that South Blooming Grove will not be able to exist in one Ward for the "6 Ward" System because its total ED population of 3,354 is too large; it is greater than the maximum variance of 3,319 residents for a ward in the "6 Ward" System.

​The example above for Ward #5 and Ward #6 is also based on Washingtonville Election District 12 (aka New Castle) being broken up into 2 Election Districts.  At least 483 residents in ED 12 need to be moved to ED 14, or to a new ED 17 (from the eastern edge of current ED 12) which needs to be created with at least 483 residents to put in Ward #6 - because Ward #6 in my example above is currently below the required minimum number of residents.

​Again, a ward like Ward #1 is a requirement for a "6 Ward" System because ED 8 (Ron) and ED 13 (Johanna) must be connected in any Ward drawing based on the current Blooming Grove Election Districts.  It makes no sense to me to not give the rest of the Town voters any choice about keeping both experienced candidates in 2017, just based on the Ward #1 examples for either the "4 Ward" or "6 Ward" system.  I believe the voters of the entire town should decide if they want to lose the Town Board experience that Ron and Johanna have, not the residents of just 1 Town Ward!

​Also, the "6 Ward" likely district breakdown does show there is 1 specific geographic location that has been "highly" underrepresented in the last 14 years of Town Government, if they are logically combined together: Salisbury Mills (Election District 3), Stone Ridge in Washingtonville (Election District 14), and New Castle in Washingtonville (Election District 12).  That location of the Town of Blooming Grove only will have 2 person-years of representation from 2004-to-2017: Mark Levy.  This is probably a factor as to why my Council campaign racked up impressive vote totals during the 2015 election in Salisbury Mills and in the newer developments of Washingtonville, since I have lived in ED 14 and ED 3 for the last 32 years.

​Even with the subtle hint that I have a 32-year natural bi-partisan voter constituency advantage in a future Ward #6 of a "6 Ward System", or in a future Ward #4 in a "4 Ward System", I am still 100% against the Ward System.  We are a small town, well represented by elected officials from all over the town in the last 14 years.  I find I am a better representative of the needs of ALL of Blooming Grove by having run as an "at large" candidate in all of Blooming Grove.